Everyday it feels like the systems and norms we rely on slip away a little more. Firestorm is a community space that hasn't been able to reopen to community due to the unconscionable mismanagement of a pandemic. Firestorm is a bookstore that wonders if its books will arrive, due to the sabotage of the postal system. And now Firestorm is an anarchist collective that isn't sure whether it will be able to reach an audience at all, due to tightening restrictions on political speech.

If we're being honest, anarchists have never had the best relationship with the Postal System. Abolitionist Lysander Spooner believed the federal monopoly on letter carrying to be a grave threat to liberty and launched a competing service, only to have it shut down by the government when it found success. Though poorly known, the Postal Service operates one of the oldest law enforcement agencies in the country, the Postal Inspection Service. That might sound innocuous, but in the late 1800s the PIS targeted feminists and leftists, some of whom were sentenced to hard labor for distributing "obscene" materials on women's independence and contraception. Postal Inspector Anthony Comstock boasted 4,000 arrests, drove more than a dozen people to suicide, and destroyed tens of thousands of books—famously declaring, "books are feeders for brothels." 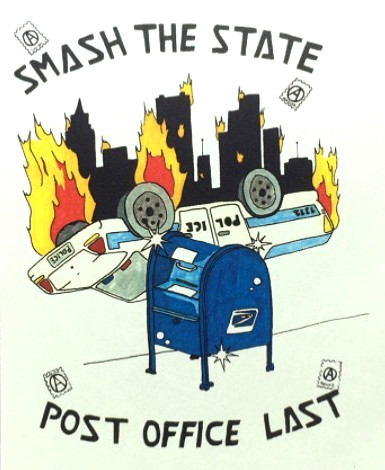 For more than a hundred years, the Postal Service has operated one of the largest domestic surveillance programs in the US. During the Cold War it targeted purported communist sympathizers, but today every piece of mail is recorded. Beloved postal workers are expected to double as the eyes of the state, something activist and bookstore owner Leslie James Pickering learned first hand when he was accidentally delivered the surveillance instructions intended for his mail carrier.

Nevertheless, mail is a lifeline for many of us (doubly so in the present pandemic) and its loss would be devastating for rural communities, seniors, incarcerated individuals, and your local anarchist bookstore. We've already seen erratic delays of shipments from our distributors and increasingly inconsistent service for packages we send. Please bear with us while we navigate these uncertain times.

Like the postal system, social media is infrastructure on which many of us rely to connect and access information. And it, too, is being weaponized against the Left. On August 19th, Facebook banned dozens of anarchist, anti-fascist and anti-capitalist pages as part of a crackdown on "anarchist groups that support violent acts amidst protests." Among others, the social media giant banned CrimethInc., a 20+ year old publishing collective whose work is ubiquitous throughout North America, including on the shelves of our bookstore.

In a joint statement with anarchist news platform It's Going Down, members of CrimethInc. wrote: "For months, Donald Trump has demanded this crackdown in a series of social media posts explicitly blaming anarchists and anti-fascists for the countrywide wave of protests precipitated by persistent police violence in the United States. A decade ago, Facebook representatives proudly touted their role in the Egyptian uprising. Today, their decision to ban publishers who discuss social movement activity shows that they are eager to play a role in ensuring that the only forms of activism that can emerge are the ones that are beneficial to the current authorities." (Read the full statement here)

Political speech has never been protected by Facebook, but this explicit targeting of the Left should be extremely troubling to radical publishers and booksellers. Our co-operative must now consider the risk of losing access to our network of 10k followers when we share a local call to protest or promote a new book, like Vicky Osterweil's much anticipated In Defense of Looting: A Riotous History of Uncivil Action.

Although in the national discourse the Postal Service and Facebook represent an opposing binary of state control and private enterprise, they have a lot in common. Both platforms are crucial to communication and commerce, and neither are subject to control by our communities, making them weapons that can be used against us. In their current forms, Firestorm cannot defend either, but neither can we survive without them.